The emergence of large shopping malls and shopping and entertainment complexes in St. Petersburg, as in many other Russian cities, was a hallmark of the early 2000s. The existing literature describes shopping centers as an example of the new consumer culture in changing post-socialist societies. This article treats them as public spaces and an arena for processes of social differentiation, social exclusion, and formation of new identities. Drawing on evidence from a qualitative study conducted in St. Petersburg in 2006–2008, it concludes that shopping centers, perceived as models of a “European” and “civilized” way of life, have become a quasi-public space for the “middle class,” banishing members of marginal groups and “undesirable” patterns of behavior. At the same time, even the relatively homogeneous environment of shopping centers gets segmented: their customers create in-group social classifications. 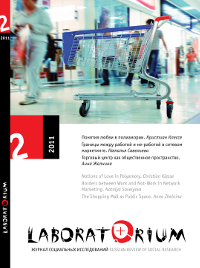