This article examines polemics and political debates pertaining to questions of gender in France in the first decade of the twenty-first century. While by no means an exhaustive overview, it offers a critical introduction to the topic, grounded in an approach that considers gender in connection with other social variables. The article focuses on two main ideas that have been foundational for sociologists and activists since the 1970s in their attempts to create an integrated perspective on various power relations and dynamics of discrimination connected with gender, sexual orientation, ethnic origins, skin color, and social status. The author presents a range of fundamental differences in relevant feminist debates on the subject of combatting discrimination on the basis of race and gender among activists, political institutions, and mass media outlets. The question of whether these forms of social and political struggles are connected or exist in opposition to each other is explored. The paper concludes with reflections on the growing necessity to include issues of age and ageism as categories of analysis and subjects of political discussion. The author argues that attention to age as a significant sociological variable will enrich our understanding of the structures of gender and race-related forms of discrimination in France today. In Russian. 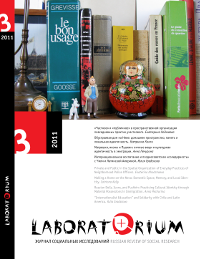