The terms “intelligentsia” and “intellectuals”—in Armenian, mtavorakanutiun—are frequently used in the Armenian political, cultural, and domestic life but are conceptualized and interpreted differently in different contexts. In this article, I describe the central discursive patterns of self-identification and self-representation among the contemporary Armenian intelligentsia. The article reveals both continuities and disruptions with the Russian and Armenian intelligentsia of pre-revolutionary, Soviet, and post-Soviet times, which leads to new conclusions about the group and its role in ongoing projects of nation- and state-building. The Armenian intelligentsia exists as a set of variations on an imagined cultural and social construct that needs constant fine-tuning and elaboration. The continuous implicit or explicit discourse on identification, forms of representation and cultural manifestation, and social roles of the intelligentsia is an important part of the ongoing process of reconciliation and negotiation of the boundaries between old and new identities, social structures, hierarchies, roles, behavioral codes, and systems of values in the modernized and globalized Armenian society. In English, extended summary in Russian. 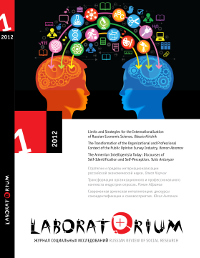